Indian English Poets You Must Read – list by a critic 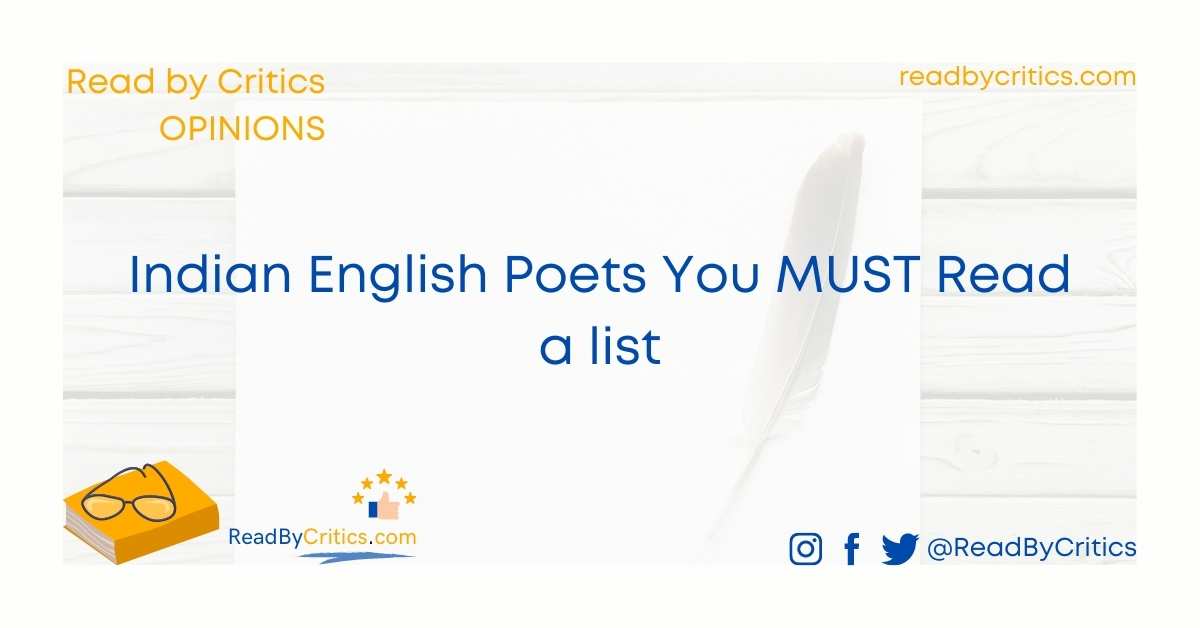 Though many critics (including myself) believe that Indian English poetry does not have that profound depth and neither does it show a mature continuation of the tradition that was started by the trio of Tagore, Naidu and Aurobindo and followed very well by the modernists like Ezekiel, Mahapatra and Ramanujan, still, Indian English poetry, maybe in fragments only, offers too much to the readers who are eager to get their share of joy, food for thought and something that sticks even after the show is over… are you one of those interested in Indian English poetry? This article is for you. Believe me, after reading this article, you will surely find Indian English poetry more interesting and vivid. Let’s dive into it now.

Sri Aurobindo: If you are an Indian (that I assume 95%), you should be aware of this name already – Sri Aurobindo is not only the name of a poet but a name of an idea, a revolution, internal strife, a struggle and thought. Sri Aurobindo, for many, is only one such Indian English poet who could successfully capture the core idea of India – the spiritual idea of India. He has the record of writing the longest poem, Savitri. He has written many poems and you can begin from anywhere you please. You can find his poems for free on the Sri Aurobindo Ashram website or you can get books in physical form from Amazon India. Buy books by Sri Aurobindo – click here

Nissim Ezekiel: It is a customary fashion to take the name of poets belonging to the same age together. However, I have decided to do something new this time. I will take the names of the poets together who don’t necessarily belong to the same age but do belong to the same school of thought, closely or remotely. Nissim Ezekiel, the wandering jew, was not an Indian by origin. However, he was more an Indian by his thoughts, his ideas and his firm belief in the idea of India. You will like his works because his works originate from the depth of Indianness. He writes about things he sees and things he wants to see. Considered by many to be the leader of the modernist poetry movement in India, Ezekiel’s poems are deeply rooted in spiritualism, Indianness, existentialism, philosophy and realism. You can read his poems in any collection published by any publication. You can buy the suggested collection of his poems here – Buy Ezekiel’s poetry collection – Amazon India

Keki N Daruwalla: Keki N Daruwala is a contemporary Indian English poet… one can say so because he still pens down poetry. However, he touched his peak in the 80s and 90s. His poems deal with contemporary issues along with the much-needed break that we often need from the state of affairs in our lives. You can feel in his poetry a sense of admiration for the world around us, what we built and what He built. A very sensible choice for all of us who want to read something different when it comes to Indian English poetry. You can get a suggested collection of his poems published by Penguins from Amazon India by clicking here: Buy Daruwalla’s poetry collection now

Arvind Krishna Mehrotra: Arvind Krishna Mehrotra is an Indian English poet but not in the commonest of this qualifier’s sense. He is an Indian poet first and an English poet later. Those who understand the importance of linguistics and its connotations will surely attach themselves to the dilemma of this and many other Indian English poets… writing in a foreign language about the things native to them… Mehrotra is that kind of a poet who can bring sense to things non-moving and he can sing the songs of nature’s beauty in terms that all would appreciate. However, deep down, you can also understand the pain that Mehrotra is hiding behind the lines he writes. A versatile poet and you cannot miss reading him! Get a collection of poems by Mehrotra of your choice and you can thank me later! Click this link to buy a book – Buy poetry collection from Amazon India (A K Mehrotra)

Sarojini Naidu: Perhaps the only poet in India who was actively a member of the Congress party and almost sacrificed her poetry output to that qualification, Sarojini Naidu’s poem has been appreciated and criticised by critics alike. Once you start reading her, you will realise that you have ample reasons as a reader to like her poems and also to criticise them because the poet gives you full freedom over her text. Simple, homely, friendly, harmonious and yet very much devoid of the reality on the ground in those days… you can read Sarojini Naidu’s poems to decide for yourself. Get a copy of the poetry collection by Naidu to understand her works for yourself. Buy from Amazon India – click here

Rabindranath Tagore: Tagore was not an original English poet per se. He was a Bengali poet first and all his creations are primarily the works in the Bengali language that were later translated by the poet himself… into English and then into other languages by other poets because Tagore’s work became very famous after he won the Nobel Prize for Literature in 1913. Tagore’s works are prescribed in the syllabuses of schools, colleges and universities in India. The guess is that you must have read a few poems by him already. If not, it’s never a bad time to start reading poems by the poet who remains unimpressed by the tragedies by the British regime on his fellow countrymen and kept his poetic penance continuing without being any concern for the lowly affairs of this mortal world… he was destined to chase higher pursuits but got fuzzy once in his life when he thought of returning the Knighthood to the British empire. I wonder how a highly conscious man like Tagore could be shaken by worldly affairs… even once! You can read poems, mostly prosaic, by getting a copy from Amazon India. Buy the book – click here to go to Amazon

A K Ramanujan: Trapped between his faith erstwhile and the faith after conversion into Christianity, as M K Naik wonderfully puts it, A K Ramanujan’s poetry is that of exile, confusion, chaos inside and resolve inside. He writes about simple things and wants to tell the world how does he feel being away from the lap of surroundings he grew up in, relatives, cousins and friends. Ramanujan’s poetry is nostalgia glued with verse and the poet is proud of it. At times, philosophy and spiritual churning super shadows the commonality of Ramanujan’s poetry and readers can apparently view the same. You should read his poems to know the man and his verse. Recommended along with Ezekiel and Aurobindo. Get a copy of the poetry collection by A K Ramanujan – click here for Amazon India

Jayanta Mahapatra: I still remember my respected professor of English at Nalanda College telling me that Mahapatra is beyond his works. He envisions before he writes. And that’s only true and I realise it the more I read this poet. Mahapatra is beyond his apparent works that we can witness by reading his works. He writes about Indianness – India in the true sense is not bereaved of its roots in spiritualism and Religious beliefs and Mahapatra seems to be realising it in his works. You can read any of his work that apparently speaks about religious and spiritual aspects of India and you will realise it too. Other than that, Mahapatra is many things more – he can recapitulate simple things that he observes as well as the complex emotions and aspects of life in verse with mastery over language and the art of poetry. He also writes about landscape and sights, places and practices, ideas and emotions, nature and the world. Do read his poems to understand place-poetry better and also enjoy some of the fine poetry produced by an Indian English poet. Get a copy now – buy a collection of Mahapatra’s poetry from Amazon India

Toru Dutt: Like Ramanujan, Toru Dutt was also restless because she was not sure of her roots. She kept dancing to the cunning tunes of French and English until she realised her genuine inspiration for poetry and produced works that would still reverberate in the mind of any reader who reads her. She lived too little, only 21 years. However, the legacy that she left behind still shines. Her poems are deep-rooted in the depths of philosophy and melancholy, at times, too much for her tender age but skilfully driven to their respective ends. You can easily notice an urge in her poetry that emphasises upon an exit from the confusions and chaos in her heart and mind. Though volumes are not here, you should read whatever Toru Dutt could produce to understand poetry at function. Get books containing poetry by Toru Dutt – buy from Amazon India

R. Parthasarathy: Parthasarathy’s poetry rests in Exile… he seems to have been overcome by the idea of exile, the idea of being chained in a foreign tongue until he surprises you with his mastery of this foreign chain that he can manoeuvre as per his will to produce the impact that he desires. R. Parthasarathy’s poetry is modern, contemporary, relevant to certain sections of readers and incomplete (because he does not settle and neither lets his readers settle). There is a constant rush in his poetry that unsettles the readers and compel them to flow with the restlessness that the poet creates with his thoughts coming in quick succession. And yet, the poet is very conscious of his roots, ideas in his poetry are formed from the subconscious that Parthasarathy remembers all the time. You will enjoy his poems. You will ask many questions about all our pursuits in life. Do read. Get a copy of the collection of poems by R. Parthasarathy from Amazon India – click here

And you will surely come back here to share your opinions in the comments section, I do believe. Let’s make this list bigger, better and more helpful and accommodative by sharing the names of the poets you would like to see on this list. Indian English poetry is not that dated but certainly vivid and wide. Let’s celebrate it!

Thanks for reading the article and we will bring more for you on this platform.

List by Alok for Read By Critics Book Blog 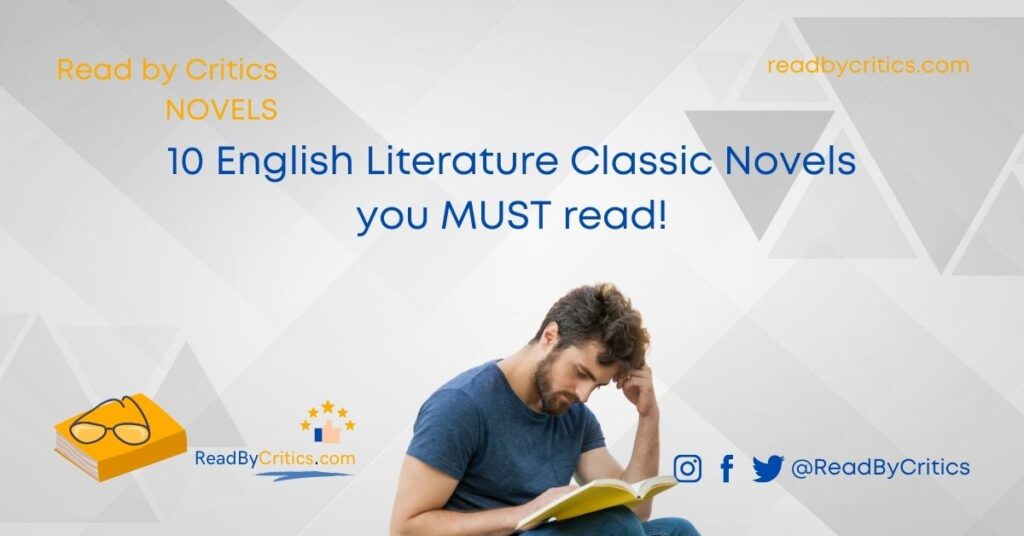 10 English Literature Classic Novels You Must Read – a list 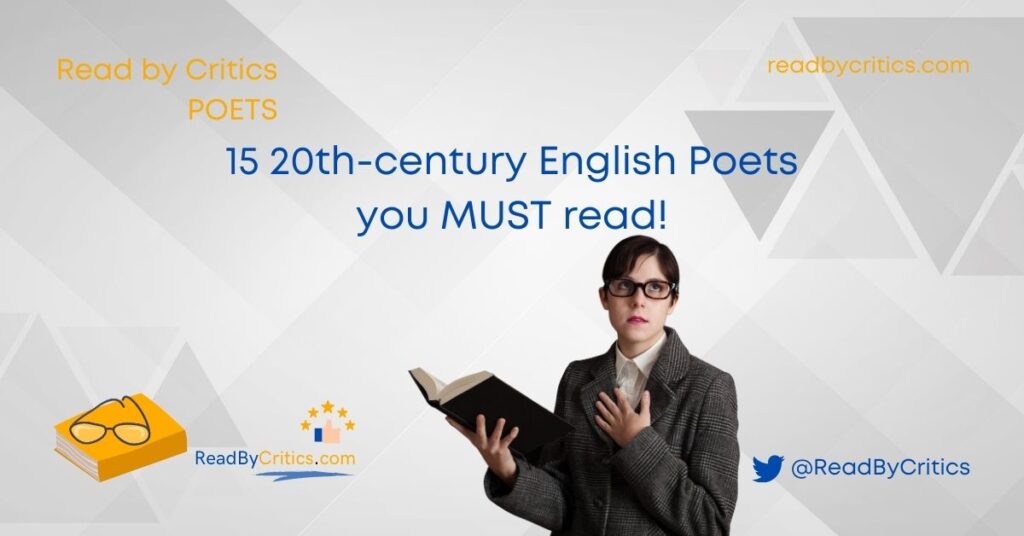 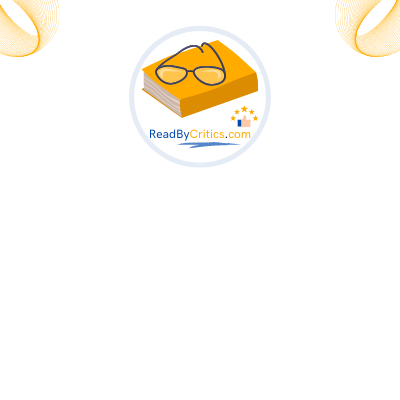